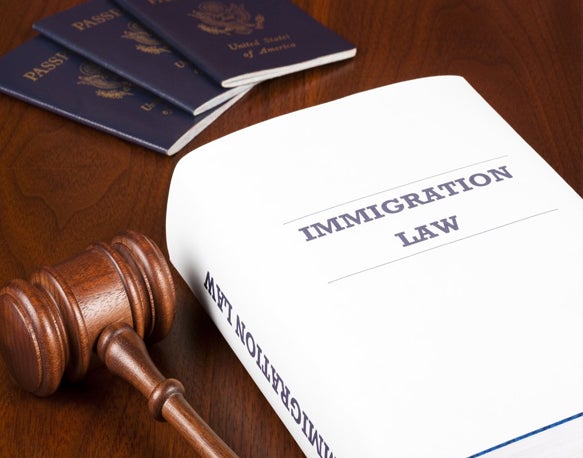 For centuries, people from around the world have been coming to the United States. They come to work, get an education, escape oppression, start a new life, do business, visit friends, or sight-see. Over the years, the United States has seen tremendous growth in diversity. In response to the incredible demand for permission to enter this country, the federal government has established a complex set of laws that determines who may enter this country and for what reasons.

A person who comes here to stay permanently is called an immigrant. Someone who intends to return to his or her country of origin is called a nonimmigrant, even if he or she intends to stay for a substantial period of time. For example, a student might stay in the United States for many years to complete an education and still be considered a nonimmigrant. The distinction between immigrants and nonimmigrants is crucial. Permission to enter as a nonimmigrant may be easier to get than permission to enter as an immigrant, so some people are tempted to claim they intend to return to their home country in order to enter this country. The Immigration and Naturalization Service (INS0) is aware of this temptation and often will deny a nonimmigrant visa application to anyone suspected of wanting to remain permanently. Also, being granted a nonimmigrant visa sometimes can make it more difficult to get an immigrant visa laterA permanent resident is an alien who has been given permission to live permanently in the United States. In a dispute with the INS over an applicant's true intent, the applicant always bears the burden of proving intent to remain here temporarily. For some people, this burden is nearly impossible to meet. For Example, the spouse of a permanent resident normally must wait over two years for an available immigrant visa. If he or she claims to want to visit only temporarily, he or she must overcome the presumption that a married person would want to remain permanently with his or her spouse. 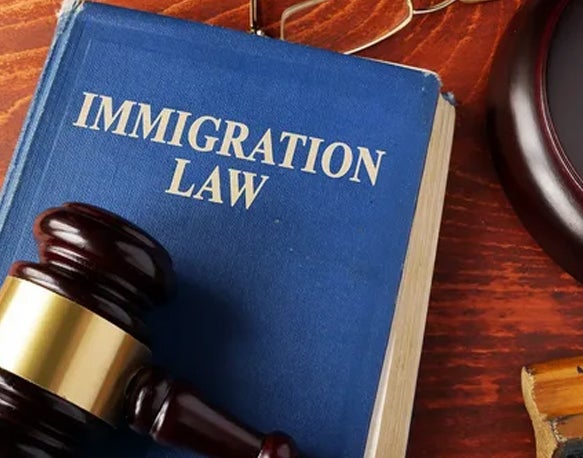 A visa is a stamp in a person's passport that gives him or her conditional approval to enter the United States. Most matters involving visas are handled by the INS. Most aliens apply for visas from a consulate or embassy of the United States in the alien's home country. Citizens of some countries, primarily European countries, and Japan, may enter the United States for up to 90 days without visas. To be eligible, a citizen of one of these countries must show the INS that he or she has a return ticket home and intends to engage in a type of business or tourist activity that would be allowed under a “B visa,” as described below. Canadian citizens generally do not need visas to enter temporarily. In some instances, they must obtain INS approval in advance if they are coming here to work.Congress establishes a complex set of quotas that limits the number of visas that can be granted for most types of visas. Whether an applicant receives a visa depends on the type of visas requested, the applicant's reason for traveling to the United States, and the applicant's country of origin. Probably the most important element to obtaining a visa successfully is knowing for which visa category to apply.

For certain categories of visas and certain countries of origin, an applicant can wait many years before he or she even will be considered for a visa. Sometimes the wait would be much shorter if the applicant applies for a different type of visa. Unfortunately, once an applicant applies for one type of visa, it can be difficult to change the application to another class of visa. For this reason, it is wise to consult an immigration attorney before applying for any kind of visa.

There are different kinds of nonimmigrant visas, Identified by the letters A-R, available for persons who do not intend to remain in the United States permanently. All nonimmigrant visas are based on what the applicant intends to do in this country. Following is a list of the visa categories.

A Visas: for diplomats and their families

B-2 Visas: the most common nonimmigrant visas, allow aliens to enter the country temporarily to engage in tourism visits with friends or relatives or to receive medical treatment.

C Visas: to enter the United States only for immediate and continuous transit through the country to a third country

D Visas: for crew members of foreign vessels or airplanes.

E Visas: for traders and investors covered by commercial treaties between the United States and foreign countries, as well as spouses and children of E Visa holders.

F Visas: for students in full-time academic programs, from the elementary school level up to the post-graduate level, as well as spouses and children of F Visa holders; F Visa holders are allowed to be employed for fewer than 20 hours a week, mainly at certain on-campus jobs typically done by the student

G Visa: for representatives, officers, and employees of foreign countries to international organizations

I Visas: for media representatives and their families.

K Visas: to allow an alien engaged to a United States citizen to enter to marry the citizen, as well as for any minor children of the alien.

M Visas: for students in vocational or nonacademic study programs.

O Visas: for artists, entertainers, athletes, scientists, and certain business professionals with extraordinary abilities in their fields, and persons needed to accompany and assist them.

P Visas: for performing artists, entertainers, and athletes; similar to visas, but easier to get and intended more for group entertainers or athletes who come here for specific performances or tours.

R Visas: for religious workers and their families.

An applicant who intends to stay in this country permanently generally is admitted either on the basis of employment or family connections. The main exception is for political asylum seekers.

A visa only gives conditional approval to enter the country. Once an alien arrives in the United States with a visa, he or she must apply for entry from INS officials at the point of entry. For most aliens, this is a mere formality, but the INS can exclude persons with valid visas for a variety of reasons, Including communicable diseases, physical or mental disorders that pose threat to others, drug addiction, or criminal history. Involvement in espionage or terrorist activity against the United States government or its people is grounds for exclusion. The Secretary of State also has broad discretion to bar the entry of anyone whose presence would have an adverse effect on the foreign policy of the United States. Sometimes waivers are available for aliens who otherwise would be denied entry for certain reasons. For example, the child of a United States citizen may be granted a waiver to enter to receive treatment for drug addiction.

An alien can get a visa as an immediate relative of a United States citizen if he or she is a child, spouse, or parent of the citizen. In addition, there are four family-based immigrant visa categories.

Each preference is allotted a total number of visas. Generally speaking, the higher the applicant's preference, the shorter the wait to get a visa.

Some groups of immigrants receive special treatment and fall outside the preference system described above.

Diversity Immigrants are immigrants from countries deemed underrepresented in the pool of applicants for visas throughout the years. A new program implemented by the INS in 1995 provides a certain number of visas to applicants from low-admission countries. An applicant also must have a high school education or two years of training or experience in a particular occupation.

Refugees and asylees also receive special treatment. A person is a refugee if he or she is outside the United States, is fleeing or has fled his or her country, and has a well-founded fear that if returned to the home country, he or she will be persecuted because of race, religion, nationality, membership in a particular social group, or political opinion. An asylee is an alien already in the United States who, like a refugee, has a well-founded fear of persecution if returned to his or her home country, The President and Congress decide each year on the total number of refugees and asylees to accept into the country. Occasionally, Congress grants immigrant visas allotted for individuals from specific countries according to political factors. recent programs have included China, I Long Kong, and Tibet. ​

An alien can receive permission to immigrate to this country on the basis of his or her employment. There are five categories of employment, known as preferences, through which aliens can be permitted to immigrate.

Second Preference: Professionals with advanced degrees and aliens with exceptional abilities in science, act, or business. (Note: “Exceptional ability” is a different standard than” extraordinary Ability” required for first preference.)

Third Preference: Skilled workers, professionals, and other workers of which there is a shortage in the United States.

Fourth Preference: Certain special workers, such as religious workers. Fifth Preference: Investors creating employment for workers in the United States; the investment must be a certain amount (i.e., between $500,000

Getting A Green Card And Becoming A Naturalized Citizen

Deportation is the expulsion of an alien who entered illegally, or entered legally but has done something to become deportable. With few exceptions, any violation of the conditions of a visa, no matter how minor, is grounds for deportation to a person country of origin. A conviction for any crime but the most minor also is grounds for deportation. Deportation can delay an alien whose long-term goal is to live permanently in this country. After being deported, aliens are forbidden to re-enter the country for five years. Aliens deported for aggravated felonies, such as drug smuggling, are barred from re-entering for 20 years or may be barred permanently. Returning home under a deportation order may result in the embassy's refusal to entrust the individual with another temporary visa. There are a number of remedies to deportation, especially if the deportable person has lived in the United States for a long time and has built a life that demonstrates good moral character. Even if the deportable individual has not been here long, there may be certain waivers or defenses to deportation. Among the most common is asking the court for “voluntary departure,” which allows the individual to depart the United States on his or her own. In any case, anyone facing deportation should seek the advice of counsel well in advance of a deportation hearing.

Get In Touch Today

Thank you for contacting us. We will get back to you shortly.

Please complete all required fields below.

The Law Offices of Edwin A Barnum are committed to answering your questions about Personal Injury, Divorce, Wills & Trusts, Probate, Real Estate, Bankruptcy, and Immigration law issues in California.

We offer a Strategy Session and we'll gladly discuss your case with you at your convenience. Contact us today to schedule an appointment.
Get In Touch